Posted on December 15, 2017 by northyorkscro

Bernard Noel Nesbitt, of St Mary’s Mount, Leyburn a Bank Clerk, was the last of six sons to be called up. Although his address was Leyburn at every documented family event or census the family had moved. His father was Reverend John Christopher Nesbitt and so it can be assumed that moving was a consequence of being wherever the church required him to be. 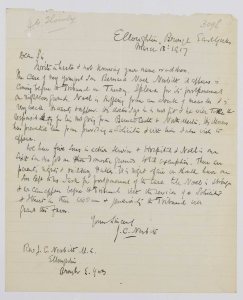 In support of Bernard Nesbitt’s appeal against consciptiom, his father writes on 18 March 1917 in the above letter: ‘I write in haste and not knowing your name and address.  The case of my youngest son Bernard Noel Nesbitt it appears is coming before the Tribunal on Thursday.  I plead for its postponement on righteous grounds.  Noel is suffering from an attack of measles and is very weak……..We have five sons in active service and hospital and Noel is our sixth son…..It is right and fair we should have one son left to us.’

Two of Bernard Noel nesbitt’s brothers joined the Royal Army Medical Corps and three the Royal Naval Volunteer Force [RNVF]. It is clear from the Reverend Nesbitt’s letter that he did not want his sixth and last son to go to war.  The two volunteers researching the Nesbitt case, Jill McNeill and Denise MacDonald, were curious about the rules concerning all brothers from one family enlisting. They found that The Great War was littered with tales of brothers lost as cannon fodder.  However, it appears that no records were kept of how many brothers enlisted from each family. Even the deaths of George and Roland Bradford, the only brothers in history to have been awarded the Victoria Cross didn’t rouse the government into understanding the suffering of families, for example the Smith family of Barnard Castle lost five of their six sons. It wasn’t until World War 2 in the USA when a family lost five sons, that The Sole Survivor Policy was created and introduced in 1948.

Of the three Nesbitt brothers who enlisted into the RNVF one, Norman, was killed in 1918 in action on a battlefield in the Battle of Albert.  He was 28. This posed another question to Jill and Denise, what was the Royal Navy doing on a battlefield? They found that at the beginning of the Great War 30,000 Royal Naval and Marine volunteers could not be found a position and so 63 [Royal Naval] Division was formed and trained to fight as infantry on the battlefield.

Bernard Noel Nesbitt’s 1916 appeal was granted and he obtained absolute exemption. However,the Military Service Act went through a number of changes between 1916 and 1919, when conscription ended. These changes led to many men who had originally gained absolute exemption having this decision reversed and they would again be eligible for conscription.  This led Bernard Noel Nesbitt to put in three further appeals.  His final appeal in  March 1918 was dismissed, implying he went to France.  However, Jill and Denise were unable to find any military or medal record to clarify his war service.

The other four brothers survived the war as did Bernard Noel Nesbitt.

Jill and Denise have commemorated Norman Nesbitt in the Every One Remembered appeal. Further details can be found via the following link: https://www.everyoneremembered.org

Jill McNeil and Denise Macdonald are volunteers on the grounds for Appeal project and have carried out the above research.

This entry was posted in Uncategorized. Bookmark the permalink.